Confessions of a ceiling addict (Part I)

I am a self-confessed "ceiling junkie." Whenever I enter a church or a castle or an old building, one of the first things I *really* have to photograph is the ceiling. So you could just imagine how pscyhed I am here in Spain, for it seems that in whichever place I enter, I always get my dose.


Colegiata de San Isidoro, LEON. The more famous ceiling is the Gothic depiction of the entire history of salvation. But since taking pics in that area is prohibited to preserve the paints, I had to be contented with the ceiling of the cloisters, which is equally marvellous. 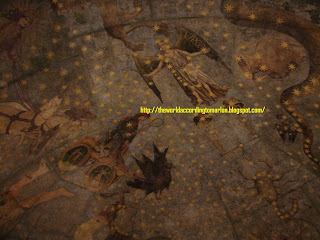 Cielo de SALAMANCA. Located in one of the buildings of the University Museum, it is a painting that once adorned the university library and depicted the constellations known to man during the 15th century. 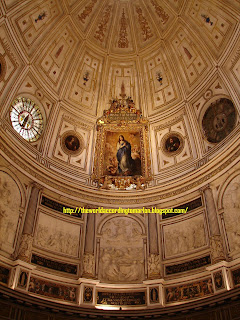 Sala Capitular, SEVILLE. The Catedral de Sevilla is already a magnificent building, to begin with, as it is the largest of all churches in the Iberian peninsula (meaning, Spain and Portugal). A narrow passage way leads to this spectacular room that never fails to impress. 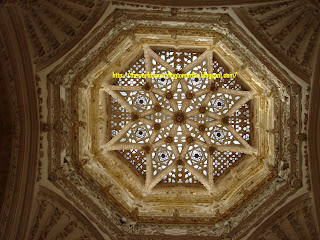 Cimborrio, BURGOS. It is what my guidebook refers to as the Estrella Calada (Perforated Star). This exquisite ceiling of the Catedral de Burgos is a fitting roof for him who is enterred directly beneath it, Rodrigo Díaz de Vivar, better known as El Cid Campeador. 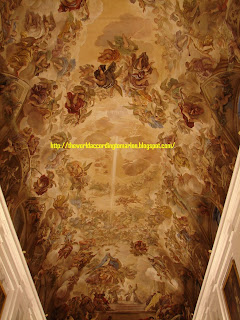 Sacristía, TOLEDO. The Catedral de Toledo is considered the seat of the primal see of Spain. Meaning, it is the principal church of the country. The ceiling of the sacristy of the cathedral is heavenly. I remember spending about 30 minutes just taking pictures and marvelling at the gorgeous portrayal of the heavens.
Posted by Marlon at 12:53 AM