One of the world's greatest tourists, Sir Edmund Hillary, has died on Friday, January 11. He was 88 years old. People will forever remember him as part of the first two-man team to ever reach the summit of Mt. Everest. Tenzing Norgay, a Sherpa, shares with him the honor.

Later on in life, he became an active environmentalist and fund raiser for Sherpa families in Nepal. 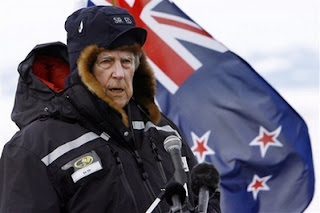 (Photo courtesy of Yahoo!)
Posted by Marlon at 8:00 AM