Tomorrow, July 25, is the Catholic feast day of St. James the Great, the first martyr among the apostles of Jesus and the patron saint of Spain and of pilgrims. Incidentally, St. James is also my personal patron saint (I owe my second name to him) and when I was in Spain, my stop in his shrine in Santiago de Compostela to venerate his tomb has been obligatory and enriching. 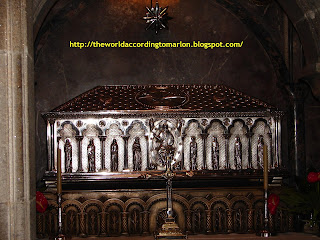 Legend has it that decapitated body of the martyred saint was washed ashore in Galicia. The place where it landed was illumined by a star, hence the name Compostella, which came from the Latin Campus Stellae, Field of the Star. The Cathedral of St. James was later on built on the site where his remains were found and the body was buried in a silver coffin beneath the main altar.
Sancte Iacobe, ora pro nobis.
Posted by Marlon at 7:15 PM